An Autumn in Paris 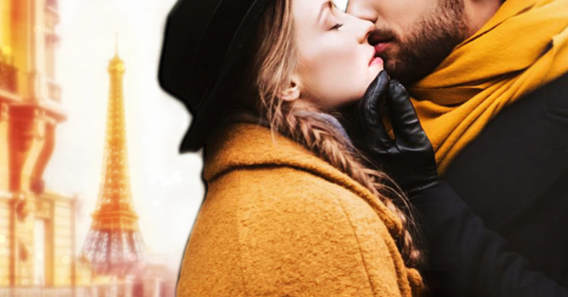 Because of Audrey Hepburn, I have foolishly…

a) bought into the whole “Paris is always a good idea” thing without any offscreen evidence,
b) uprooted my son and left my bittersweet memories behind,
c) allowed Thomas—the handsome, caring, way-out-of-my-league vet—to disrupt the humdrum life I had self-prescribed for my Broken Heart Syndrome.

Behind his easy smile and swoon-worthy pecs, Thomas conceals an open wound. No matter how hot his kisses or how genuine his affection, he’s still reeling. He can’t move on.

And I can’t risk falling for him. I have a child to raise—a preteen boy who needs his mom to be all there.

But as autumn strips the trees of their leaves, falling for Thomas is exactly what I do. Throwing caution to the wind, I dare to hope for a future with him…

…until the past comes knocking.

Can we handle it or will it break us forever?

Two beautiful yellow-red leaves drift down from a tall linden tree, pirouetting next to each other. They descend in perfect unison, but their moves are unsynchronized, and they never touch.

I halt to watch their progress.

Unlike the human raves I’ve seen, this botanical dance is full of grace, subtle beauty, and decorum. That’s how Belle Epoque courtships between tailcoat-wearing gentlemen and wasp-waisted ladies were conducted, I imagine. The elegant couple would spend weeks strolling up and down Champs-Elysées and talking, before he dared to brush his fingertips against her gloved hand.

Only, this courtship is doomed.

When the star-crossed sweethearts hit the sidewalk—just a hair’s breadth apart—I shovel them into my garbage bag.

Autumn in Paris with its gray skies and nature’s decay always fills my heart with equal parts melancholy and anger. In other words, I hate it.

Picking up the broom, I resume my work, determined not to let anything or anyone distract me. The goal is to finish cleaning outside and get started on the hallway by the time those heavy clouds overhead decide to relieve themselves on the city.

A man walks in my direction. I don’t look up. When his feet come to a halt next to my broom, I hazard a guess that it’s the chairman of the condo, Monsieur Dubos.

I freeze. There’s only a handful of people who call me Dana. Monsieur Dubos isn’t one of them. He addresses me by my full name, Daniela. Besides, that voice…

Slowly, I straighten my back and look up.

I say nothing. He’d been gone four years, and I was hoping I’d never see him again.

I shrug. “At school. Where else would he be at this time?”

“Still upset, eh?” My ex-boyfriend smiles and shakes his head. “Except, it’s me who should be angry. If memory serves me right, you whacked me so hard I ended up in a hospital.”

“Except,” I say, mimicking his expression and tone, “if memory serves me right, you ended up in a hospital because you were drunk and you fell and hit your head.”

“After you punched me and kicked me out in the middle of the night.”

Bile rises in my throat. “Shall I count all the times you hit me before that incident?”

He raises his hands in a conciliatory gesture. “There’s no need. I’m not here to settle old scores or poke old wounds. I’m here with an offering.”

I narrow my eyes.

“Three tickets to a stand-up comedy on Sunday afternoon.” He pulls said tickets out of his pocket and waves them in front of my face.

Nico’s willingness to include my son in something is a first. He’d never do that while we were together, always arguing it would ruin the fun. It’s not that he hated Liviu or ever hurt him—which would’ve been an immediate deal breaker for me, by the way—he just saw Liviu as a nuisance.

“Wait, there’s more.” He thrusts his chest out. “The show is at Le Grand Rex.”

He pauses and surveys my face for a reaction to his largess.

Nico grins, no doubt expecting me to melt, overcome by a heat wave of gratitude. Aww, isn’t he thoughtful? Isn’t he freaking magnanimous, inviting his ex and her son to the iconic movie theater? Which, indeed, happens to be my number one favorite place in Paris…

Would it be terribly rude if I grabbed two of his tickets and said, “Thank you! Liviu and I would love to go to Le Grand Rex, without you.”?
“Thanks, but I can’t,” I lie. “I already have plans for Sunday.”

“Do you, now? What plans?” His lips and eyes tighten, and his fake magnanimity gives way to a much more familiar expression.
I recoil.

As if catching himself, Nico gives me a forced smile. “Come on, Dana, it’s unlike you to hold a grudge… If you’re pissed off that I stayed away for so long, you shouldn’t be. I was sobering up and pulling my shit together. Got a new job now, better pay. You can’t blame me for that, can you?”

“I’m not blaming you for anything,” I say. “I just don’t want you back in my and Liviu’s life.”

He gives me a long, hard look. “Nah. It’s the anger talking. I’ve watched you from afar the last couple of weeks. It’s just you and Liviu in the loge. And you’re not seeing anyone.”

“You’re sad and lonely, chérie, and I’m the solution to that.”

Should I even bother explaining to someone so full of himself that I’d rather spend the rest of my life “sad and lonely” than with him?

I roll my eyes. “You as a cure is worse than the disease. Bye, Nico.”

“Your loss,” he grits through his teeth and shoves the tickets back in his pocket.

As he walks away, it starts to rain.

I tell myself he got the point. He tried, met with resistance, and gave up. There’s no need to feel scared or even apprehensive. Didn’t he say he had a brand-new life? He wouldn’t want to risk that for a concierge—a building janitor—would he?

Besides, I really need to finish here before this drizzle turns into full-blown rain.

Did I mention I hate autumn? It always drops poisoned gifts into my life. Like Nico five years ago. And much worse before that.

In November twenty-nine years ago, the wall between Eastern and Western Europe fell in Berlin. It was a good thing, no doubt, but it also caused riots at home in Romania. My uncle, Mami’s only sibling, was killed.

That same autumn, in a Bucharest hospital, Mami gave birth to me. She was all alone. My father had dumped her as soon as she told him about the pregnancy and her own mother was too crushed by her grief.

A week after I was born, our neighbor Mrs. Radu, delivered Marius, the purest, sunniest human being to have ever graced the earth. And then one early autumn day, seventeen years later--

I suck in a breath. Not going there now.

Picking up my bucket and broom, I rush inside. As I start washing the granite floor, I promise myself to do a better job fighting my autumn blues. If I were on my own, it would be all right to sulk all day for the rest of my life. But I have a son. All I want is for him to be happy.

Baloo gives an enthusiastic bark from inside the loge. The fluffy little pooch must’ve caught a whiff of my scent. I smile. That dog, adopted to reward Liviu for his good grades last year, is a much better remedy for my “sadness” than Nico could ever dream to be. Which reminds me, Baloo has an appointment with our new vet at ten.

I glance at my watch. It’s twenty to ten. The old vet, Dr. Vannier, could make you wait for thirty minutes, but he was also cool if you showed up a little late. I have no idea what kind of relationship the new doc has with time. Maybe he’s just as relaxed as Dr. Vannier, or maybe he’s much more fastidious.
​
In any event, it looks like polishing the hallway mirror will have to wait until this afternoon.

GET IT ON AMAZON