A Royal for Christmas
Excerpt 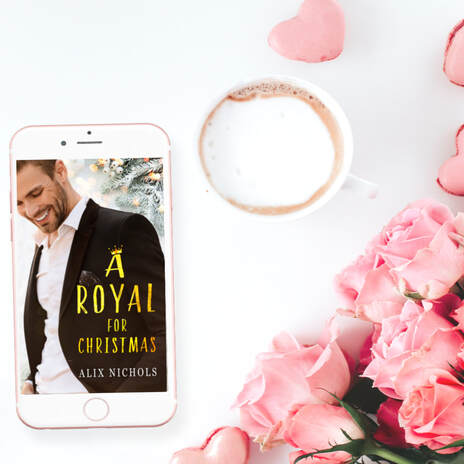 I set up the stepladder by the side of my trailer, climb on it, and begin to remove the snow from the roof.

Half an hour later, I’ve scooped and brushed off all I that could reach. After returning the equipment to the shed, I reenter the trailer and dart to the kettle to make some tea and thaw my frigid hands.

Someone raps on my window. I’ve done my research, so I know the visitor at once. It’s him, His Smashing Handsomeness Marquess Louis-Philibert de Valois, heir to the dukedom of Arrago, and second cousin to Crown Prince Theodor.

With stiff cold hands, I open the door a crack without removing the chain lock.

The marquess strides toward me. “Hello. Are you Camille Mussey?”

“My name is Louis de Valois. I believe my grandfather’s men told you I’d be paying a visit.”

Instead of confirming, I ask tartly, “How do I know you are who you say you are?”

“Er… You’re right. Of course.” He pulls an ID from the inner pocket of his coat.

I take the laminated card from his hand, read the name, look at the picture, then at his ridiculously well-proportioned face. Having seen dozens of photos of him online, I knew what to expect. I thought I was prepared. But I find myself gasping for air despite the chill.

No man should be allowed to look this hot, especially not a moneyed aristocrat. It’s like cheating. And I despise cheaters.

My breath is stuck in my throat just from looking at this man.

He’s tall and well-built and has intelligent hazel eyes, high cheekbones, a straight nose, chiseled lips, and a firm jawline. And all of that is framed by thick wavy hair the color of honey. He’s simply too much.

Mad at myself for the way I’m reacting to this toff, I return his ID. “What do you want?”

“Would you like the long version or the short version?”

“The short one, please.”

He glances at his expensive watch and mutters, “Just as well.” Then he meets my gaze. “I want to marry you.”

The next second, I burst into laughter, double up, and go on and on, releasing the nervous energy that’s been building for days.

Once my heart rate is back to normal, I wipe my eyes, and inject all the snark I’m capable of into my words, “When I feel like being pranked, my lord, all I need to do is snap my fingers.”

He begins to protest, but I hold up my palm to shut him up.

“You see, half of the principality has been lining up for years for the honor. You don’t get special treatment. Take a number and go to the end of the line.”

He throws a look over his shoulder, and I realize there’s a car parked a few meters behind him. It’s big and spotless and black with tinted windows and other luxury details.

The person in the driver’s seat rolls down the window. “My lord, if I may, you’d better start over.”

The back seat window comes down, too.

“Rudolph is right, my lord,” a sharp-looking young woman calls out. “Don’t lead with the proposal. Explain the deal and how it benefits her, first.”

Louis turns back to me. “My apologies. I’m supposed to be a seasoned diplomat, yet I completely mucked this up. May I start over and explain everything?”

I open the door. “Please, have a seat!” I motion to my only chair – the one with the missing slats.

Knowing what the gap will do to Louis’s tight ass dispels any lingering palpitations in my chest. I’m out of the woods. All his hotness notwithstanding, if he proposes marriage again or hits on me, I’ll hit him on the head with a skillet.

He shifts in his chair, wincing. The gap must be bothering him.

After the duke’s guards warned me to expect such a high-level visit, I should’ve done something about my only chair. I should’ve gotten some tools from the community shed and removed another slat near the front edge.
​
That way, the seat would’ve pinched his lordship’s balls, too.